The Persin Island is a Bulgarian island of the Danube River, located close to the town of Belene, in the Pleven district. With its area of 41.1 sq. km., Persin is the largest Bulgarian island.
Belene’s Second Site was the largest concentration camp for people, who were considered politically dangerous by the communist government. The camp was created by the Bulgarian Communist Party in 1949. By the end of the same year the Second Site, which was located in the eastern part of the Persin Island, had 4000 prisoners. The first inmates lived in dugouts, dug by them, and covered with leaves and twigs.
A neighboring island became a concentration camp for females.
Initially the island was linked to the mainland by a wooden bridge, which has been transformed into a pontoon facility.
Many photographs and documents from the communist camps in Bulgaria have been deliberately destroyed by the Bulgarian Communist Party at the beginning of the political changes in the country. We shall refer to the work of investigative journalist Hristo Hristov and his website, pametbg.com
:

“The Belene Concentration Camp was opened on April 27th, 1949, by a secret decree of the Cabinet headed by Prime Minister Vassil Kolarov. The communist government wanted to set up a correctional facility for penal labour and assigned the task to the Ministry of Internal Affairs, which got to control the Danube islands of Persin, Golyama Burzina, Malka Burzina, Milko, Magaretsa, Sovata and Predela.

This laid the foundations of the largest concentration camp for political enemies of the Bulgarian Communist Party. Known as the Belene Camp, it was built on the largest of the islands mentioned above, the Persin Island. The camp, located in the eastern part of the island, became known as the Second Site. In July, 1949, the first group of about 300 inmates was escorted there from the Bogdanov Dol Camp.

There the opponents of the communist dictatorship lived under inhumane conditions. They were subjected to daily physical labor with unachievable production quotas and in the constant presence of armed guards. They were stuck in dugouts and huts, built by them with materials at hand. Still, the most terrible thing at the camp was hunger.

During the years, tens of thousands of people passed through the Belene Camp. After Stalin’s death in 1953, political imprisonment in Bulgaria was suspended for a short period of time, but after the Hungarian Revolution in 1956, it was resumed. Between 1953 and 1956, the First Belene Site, located in the southwestern part of the island, became an isolation facility for opponents of the regime from all around the country, who got their sentences after manipulated trials. 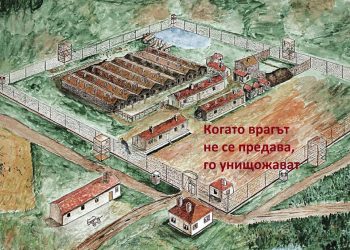 In August 1959, after numerous publications in the Western media about the camps that still existed in Bulgaria, Politburo of the Central Committee of the Bulgarian Communist Party decided to close the Belene Camp.
Although it was officially closed in 1959, it continued to function as a correctional facility for political prisoners, mostly members of the Bulgarian Agrarian People’s Union. In 1960 the camp was transformed into a prison.

In 1985, in the place of the former Second Site, the government incarcerated more than 500 Bulgarian citizens from Turkish descent, arrested for resistance against the forcible changing of their names, conducted by the communist regime. In April, 1986, the prisoners started a hunger strike, which lasted 30 days. During the first days of May, 1986, most of the camp’s inmates were released and exiled to various regions of the country.

After the collapse of the communist regime in Bulgaria in 1989, the Belene Camp became a place for commemoration of all camp victims during the rule of the Bulgarian Communist Party. The first organized commemoration, initiated by the Club of the Repressed, was held on June 7th, 1990, at the Second Site on the Persin Island. The commemoration turned into a protest demonstration of several thousand people from all around the country, including many former inmates and representatives of the political opposition.

During the next several years, the Second Site became a place for annual commemorations, held at the end of May or at the beginning of June. A pile of stones with a cross and a crescent on top of it symbolized the presence of Christians and Muslims during the existence of the camp.

In April, 2014, the local Catholic priest Paolo Cortese, sent to Belene from Italy, initiated an Organizational Committee for the construction of a memorial of the victims of the Second Site. The Committee included residents of Belene and formerly repressed citizens of Italy and France. During the year, the priest organized group visits to the camp and attracted visitors from abroad.”

For many years certain groups in the Bulgarian society have been trying to hide the truth and justify the existence of the camp with the fact that it was inhabited by criminals. The truth is that in 1953 the so-called “criminal prisoners” were only 3 percent of all. Most of them, however, had been sent there without a trial. To justify torture and murder on the Persin Island is, to put it mildly, cynicism.
It is time for the society to learn the truth about the concentration camps, which were more than 80 during the time of the communist regime. More than 300 000 people have passed through these camps and 15 000 to 30 000 have been killed.